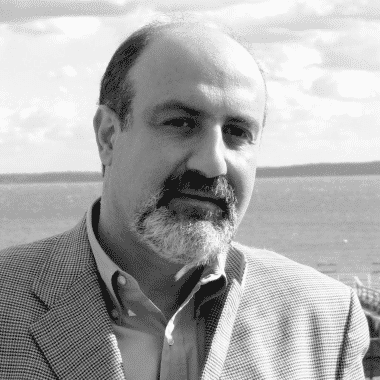 Nassim Nicholas Taleb spent two decades as a risk taker before becoming a full-time essayist and scholar focusing on practical and philosophical problems with chance, luck, and probability. His focus in on how different systems handle disorder.

He now spends most of his time in the intense seclusion of his study, or as a flâneur meditating in cafés. In addition to his life as a trader he spend several years as an academic researcher ( Distinguished Professor at New York University’s School of Engineering, Dean’s Professor at U. Mass Amherst).

He is the author of the Incerto (latin for uncertainty), accessible in any order (Antifragile, The Black Swan, The Bed of Procrustes, and Fooled by Randomness) plus a freely available technical version, Silent Risk. Taleb has also published close to 55 academic and scholarly papers as a backup, technical footnotes to the Incerto in topics ranging from Statistical Physics to International affairs. Taleb’s books have more than 100 translations in 35 languages.

Interact one-on-one with Nassim Nicholas Taleb and other speakers in VIP lounge with an DECENTRALIZED ticket. Register now with a 30% discount