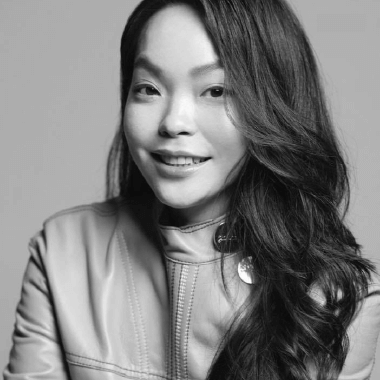 Poesy Liang is an interdisciplinary artist with a background in architecture, luxury design & media. She is an innovator on the social front, founding 2 Facebook movements – Helping Angels 善⾏天使 & Bald Empathy Movement, and has won numerous media awards in South East Asia for her humanitarian projects. An early adopter of technology since 1999, long before the terms ‘blogs’ and ‘cloud storage’ even existed. Poesy recently implemented a blockchain system with her collection of physical works for authentication & provenance, and receiving bitcoins as a mode of payment since late 2015. Her famous cat Harry Putter appears on Telegram as emoji stickers.
Poesy is occasionally invited to speak on leadership platforms to share her remarkable energy that defeated paralysis twice caused by spinal tumours, and her survivor story is often retold in the media. While Poesy continues to produce paintings, sculptures, objects, museum installations, gemstone jewelry, lifestyle spaces, fashion, etc – she also create music and movements, and actively experiment with technology to widen her portfolio around her signature works – she finds it important to bridge the gap between the realms in order to achieve her calling to affect media reform and engage her skills for social good.
Poesy started out in the world when she was aged 14 as the Levi’s 501 girl for South East Asia and became a familiar face in Asian television commercials before she reinvented herself into this current form. She grew up to hate reality tv because of the values that are being presented to the world today.

Interact one-on-one with Poesy Liang and other speakers in VIP lounge with an DECENTRALIZED ticket. Register now with a 30% discount